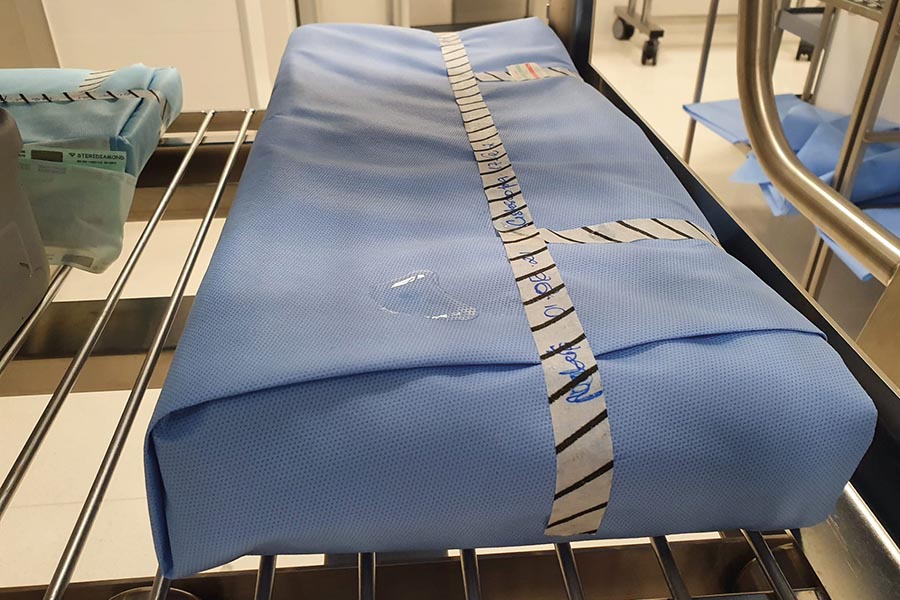 ‘Wet packs’ create a potential pathway for the migration of microorganisms from the outside to the inside of the packed set, so identifying underlying issues is a vital part of quality control. Dr. Georgia Alevizopoulou provides a troubleshooting guide and discusses some of the factors that lead to ‘wet packs’.

A common source of frustration globally for both Central Sterile Services Department (CSSD) and Operating Room (OR) personnel, since the earliest days of sterilisation in hospital practice, is the occurrence of “wet packs”, a common term used in healthcare to describe items containing moisture after the sterilisation process is completed (see figure 1). In a stricter definition, packs are considered wet when moisture in the form of dampness, droplets or puddles of water is found on or within a wrapped pack, instrument and basin set or a container after completed steam sterilisation cycle and generally at least one hour cooling time.1

The first thing to point out before discussing the details is that the problem with wet packs is rather a big one. The troubling issue with wet packs is that they result in considerable time and expenditure on reprocessing of all packs, serious disruptions in the service and procedures of the CSSD and the OR, as well as in the fundamental risk of a breakdown in the sterility of the product and/or the sterile field.

Under normal, validated operating conditions, the instruments, single or in sets, in the load will be dry following steam sterilisation. The observation of moisture remaining on or in a sterilised pack should be alarming: wet packs create a potential pathway for the migration of microorganisms from the outside to the inside of the packed set and thus, when identified, they are considered compromised and rejected as non-sterile. In fact, it is very likely that there are several wet packs in the same load and, typically, the entire load needs to be recalled and reworked.