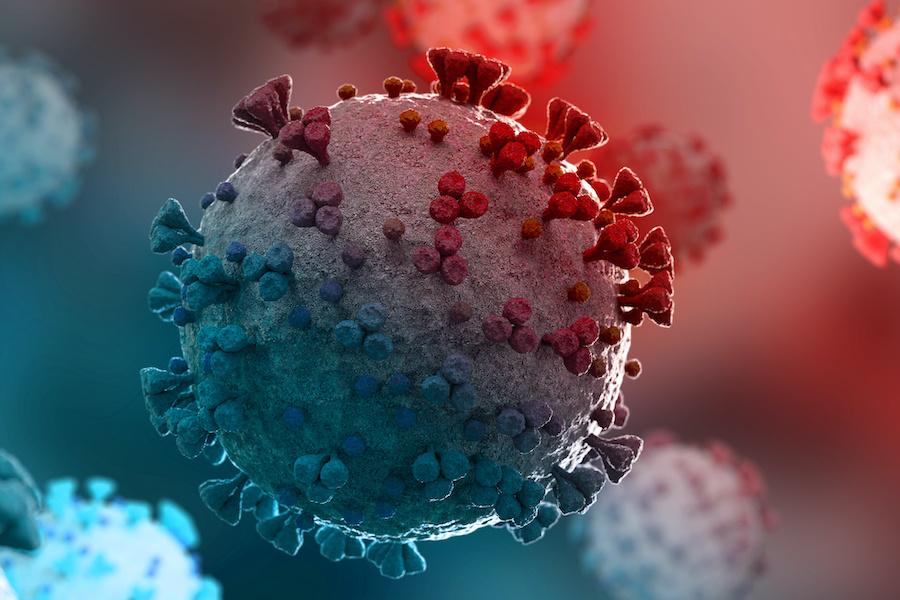 ‘Immune imprinting’ by different SARS-CoV-2 spike sequences from variants and vaccines means we now have diverse patterns of protection against new variants.

New research shows that the first SARS-CoV-2 spike protein a person encounters, be it by vaccination or infection, shapes their subsequent immune response against current and future variants. That is, it imparts different properties that have an impact on the immune system’s ability to protect against variants, and also affects the rate of decay of protection.

The study is published in Science by a team from Imperial College London and Queen Mary University of London. It is funded by UKRI.

It is known that antibody levels wane over time following infection or vaccination, but the new research shows that an individual’s protective immune responses are also affected by which strain or combination of strains they have been exposed to.

At 23 months into the pandemic, people across the world have very different patterns of immunity to the SARS-CoV-2 virus, based on their exposure. Globally, people have been exposed to the original strain and/or Alpha, Beta, Gamma, Delta variants and now Omicron. In addition, people may be unvaccinated or have had one to three vaccine doses (which are programmed using the spike of the original strain).

Each SARS-CoV-2 variant has different mutations in the spike protein, and the researchers found that these shape the subsequent antibody and T cell responses (the immune repertoire).

Professor Rosemary Boyton, from Imperial’s Department of Infectious Disease, says: “Our first encounter with spike antigen either through infection or vaccination shapes our subsequent pattern of immunity through immune imprinting. Exposure to different spike proteins can result in reduced or enhanced responses to variants further down the line. This has important implications for future proofing vaccine design and dosing strategies.”

The new study looks at ‘immune imprinting’ in healthcare workers after 2 doses of Pfizer vaccine to understand their immune response to infection by variants of concern. It involves detailed, longitudinal follow-up of the ‘Barts COVIDsortium’ healthcare worker cohort of 731 individuals, who have been followed since March 2020.

The researchers compared protective immunity between people infected in the first wave with the original strain, or in the second wave with the Alpha variant.

In second wave infected people, three encounters with different spike proteins (ie, with sequences following Alpha infection and two vaccine doses) resulted in lower protective (neutralizing) antibody responses against the original strain and the Beta variant, yet higher responses against Delta when compared to encounters with three of the same spike sequences (ie, all with the original, first-wave sequence through infection and two vaccine doses).

The study also showed that neutralising antibody responses against variants decay differentially over time after these mixed spike encounters.

There were a number of cases of Delta breakthrough infection in two dose vaccinated individuals in the study. Levels of spike antibodies measured three weeks after the second vaccine dose were high, yet the actual levels of protective neutralizing antibody responses against Delta had fallen to zero five months after their second dose.

However, a third dose of the original spike from a booster vaccine uplifts the antibody response.

The researchers stress that, despite breakthrough infections being seen, immune responses to vaccination are still effective in preventing severe disease and death from COVID-19 in the face of Alpha, Beta, Gamma and Delta variants.

Based on their findings, the researchers say that vaccine design and dosing strategies need to be future proofed to take maximum advantage of immune imprinting. This will involve enhancing the breadth of protection rather than tweaking the vaccines with the latest variant spike sequences.

Professor Danny Altmann from Imperial’s Department of Immunology and Inflammation said: “We’ve recently had some very large studies making the point that vaccine immunity wanes quite rapidly. This leaves us vulnerable to Delta breakthroughs, and protection can generally be rescued by a third dose. This study now offers considerable new detail about who is susceptible and when. You can be someone who made a great response to the vaccine and still fall prey to Delta breakthrough if you haven’t had a booster.”

“The really surprising news was finding that people infected with the Alpha variant had such different patterns and waning of immunity to other variants. Immune imprinting means we’re now all walking around programmed slightly differently for our future protection.”

“The challenge is how to broaden the population’s immunity in the right way as we need to ensure the widest coverage possible. Currently, with the Omicron variant emerging, it’s vital that people get their booster vaccines. But in the future, we should consider how we can create vaccines that broaden our immune response even more to protect against other new variants of concern.”

Dr Catherine Reynolds, from Imperial College London, said: "Our study highlights the importance of understanding the immune responses to the different SARS-CoV-2 variants in the context of existing vaccines, in order to make informed decisions about future vaccine design, strategy and timescales"

Dr Joseph Gibbons, from Queen Mary University of London said: “The emergence of new variants with the potential to evade immunity has shown that we must future-proof the next-generation of vaccines. We studied immunity over time in people infected with different variants and found that vaccine responses are highly variable depending on the infecting strain. These findings can be used to ensure vaccine design is optimal. This work highlights the importance of continually monitoring the effectiveness of vaccines against new variants such as Omicron.”

RJB, DMA and AMK are supported a UK Research and Innovation (UKRI) award.

Imperial College London is one of the world's leading universities. The College's 20,000 students and 8000 staff are working to solve the biggest challenges in science, medicine, engineering and business.

Imperial is the world's fifth most international university, according to Times Higher Education, with academic ties to more than 150 countries. Reuters named the College as the UK's most innovative university because of its exceptional entrepreneurial culture and ties to industry.

Imperial staff, students and alumni are working round-the-clock to combat COVID-19. Imperial has nearly two thousand key workers, and is at the forefront of coronavirus epidemiology, virology, vaccine development and diagnostics. More than one thousand Imperial staff and students are volunteering to support the NHS. http://www.imperial.ac.uk/