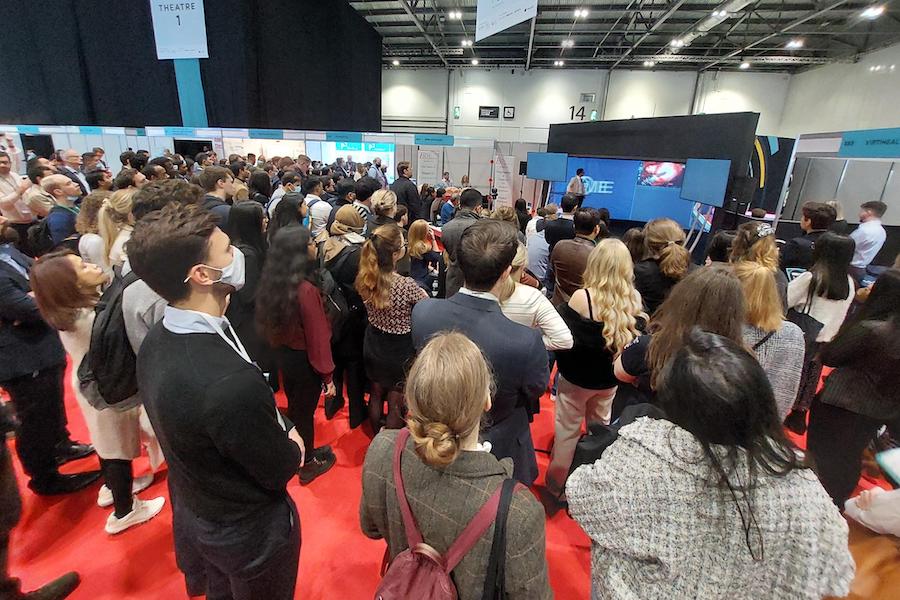 Mr Ben Challacombe, Consultant Urological Surgeon at Guy’s and St Thomas’ led the robotic partial nephrectomy (partial kidney removal) on one of the Trust’s patients at Future Surgery 2021 – the first live robotic partial nephrectomy to take place at the event. The surgeon used the DaVinci robot to make smaller incisions to remove the part of the kidney, avoiding larger cuts and more scarring.

The procedure was live streamed to the exhibition via Proximie – a technology platform that allows clinicians to virtually ‘scrub in’ to any operating room or cath lab from anywhere in the world.

Robotic partial nephrectomy (partial kidney removal) is a delicate procedure used to treat kidney cancer, while sparing as much healthy kidney tissue from damage or removal as possible. The minimally invasive approach, which can be performed using very small incisions, gives equal cancer control to that of open surgery and makes for an easier recovery after surgery.

Patients who have a small tumour in their kidney are suitable for a partial nephrectomy. During the procedure, fine articulating instruments are used to precisely remove the tumour alone and preserve the remaining kidney.

Mr Challacombe said: “Robotic partial kidney removal has several benefits for patients over both standard keyhole and open surgery, including less time in hospital, faster recovery times and less pain. When Surgeons use the robots, they effectively have their hands inside the patient without open surgery.

“We can perform the key part of the procedure in less time using the robot, so this reduces the time that blood flow to the kidney is stopped while the tumour is removed. Consequently, there is less damage to the kidney, keeping it functioning better after the operation, and more of the kidney can be preserved.”

During a robotic procedure, surgeons control the robot’s ‘arms’ from a console as they look down small telescopes on the end of each arm to see inside the four keyhole incisions. The machine gives them a 3D HD view while they operate, eliminates tremor and provides an increased range of movement, which leads to more precision and quicker stitching.

Guy's and St Thomas' claims to carry out the most robotic operations in the UK with around 1,100 cases a year, using three da Vinci surgical robots. Robotic surgery is commonly used for prostate, bladder and kidney removal.

NHS England has recently endorsed robotic surgery as a new way to perform a partial nephrectomy. The team at Guy’s perform around 70 cases a year and have carried out more than 300 to date.

Mr Challacombe was appointed to Guy's and St Thomas' in 2010 following his fellowship in Australia. He is the highest volume surgeon for robotic partial nephrectomy in the UK (over 600 cases) and also specialises in robotic radical prostatectomy, and robotic surgery for nephro-ureterectomy, pyeloplasty, adrenalectomy and nephrectomy, and Holmium laser prostatectomy (HoLEP). Overall, he has performed over 2,000 robotic procedures and 1,000 HoLEPS.

Paul Benton, Managing Director, International at the ABHI added: “We are delighted to be joined by Guy’s and St Thomas’ at Future Surgery 2021 and look forward to their cutting-edge demonstration. Our simulated surgical theatre will celebrate collaborations between healthcare providers, clinicians and healthcare technology companies, allowing visitors to watch Britain’s best surgeons in action.”

Taking place at ExCeL London, Future Surgery is being run in partnership with the Royal College of Surgeons of England and features over 100 expert speakers, covering all that is new in the field of surgery.

Throughout the show ‘ABHI’s ‘Surgical Simulation Theatre’ will be replicating a fully working operating theatre. All live simulation sessions throughout the two-day event are being live streamed through the virtual UK Healthcare Pavilion.

Intersurgical is a global designer, manufacturer and supplier of a wide range of high quality medical devices for respiratory support. We provide flexible patient solutions for airway management, anaesthesia, critical care and oxygen & aerosol therapy, for use within emergency care, hospitals and also in the home.