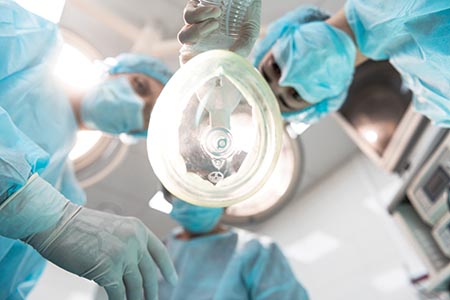 The next stage in reducing operating theatre carbon footprints has arrived, and it is all about sustainability innovation to develop a circular economy for inhaled anaesthesia (fig.1). The healthcare system in England is estimated to be responsible for 4-5% of the country’s overall carbon footprint,1 and 30% of the total public sector greenhouse gas emissions.2 Carbon dioxide emissions from the National Health Service (NHS) in England total a greater amount than annual emissions from aircraft departing Heathrow airport.3

The UK was the first major economy in the world to pass legislation tackling the country’s contribution to climate change.4 The NHS committed to support the first climate change plan in 2008, with the goal of cutting carbon emissions by 80% by 2050, compared to a 1990 baseline.5 In August of 2019 NHS organisations in Manchester were the first to declare a “climate emergency” and committed to broad action to reduce carbon emissions and avert illnesses and disease.6

In January of 2020, NHS chief, Sir Simon Stevens, announced that the agency is implementing a three-step programme targeting healthcare-related emissions, which includes an expert panel charged with identifying a strategy to achieve “net zero”.