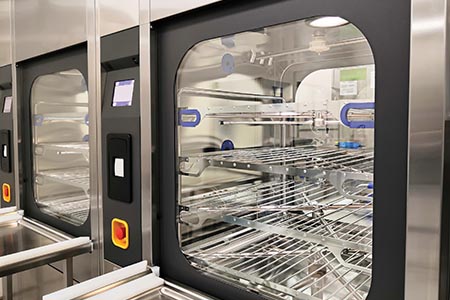 Dr. Frank Bakker discusses the key factors that must be considered to ensure the reprocessing of sensitive instruments is performed safely, efficiently and without compromising the integrity of the devices.

Selection of appropriate chemicals must be made a priority, he explains.

Minimal Access Surgery (MAS) via laparoscopy has become the gold standard for some common surgical procedures across multiple surgical subspecialties.1 It has been shown to be as effective as open surgery, but is associated with decreased operative times, smaller incisions, reduced postoperative pain, shorter hospital stays and improved patient satisfaction1 A 2018 report by the Office of Health Economics found that a shift to MAS led to a reduction in the average length of stays for gynaecology patients from 5.5 days to just 1.5 days in 95% of cases.2 However, the utilisation of MAS techniques is highly variable across the United Kingdom (UK), and remains low for many procedures (for example in England less than 25% of hysterectomies are performed using MAS).2

A further innovative development of MAS has been robotic-assisted surgery. Both use small incisions, a camera and surgical instruments. The first robotic procedure was performed in 1985 to conduct a neurosurgical procedure requiring delicate precision. With its success, the first robotic-assisted laparoscopic cholecystectomy was then performed in 1987. Despite these early successes, robotic surgery did not enter the mainstream until 2000 when da Vinci (developed by Intuitive Surgical) was first approved for use by the US Food and Drug Administration (FDA).1

The architecture and planning of a hospital is of crucial long-term importance to functionality and successful patient care. It forms the basis for optimal hospital processes and, in turn, minimises the workload of hospital personnel. We have been supporting workplace design in the field of acute care for over 50 years. With our expertise in complex processes, we can work with customers to develop the right concept – so that we can deliver tailored, flexible and future-proof solutions.

Single Use Surgical was established in 2001 as a direct response to UK hospitals’ concerns over the cleaning practices involving fine lumen instruments, and how it posed a high risk of cross contamination between patients.