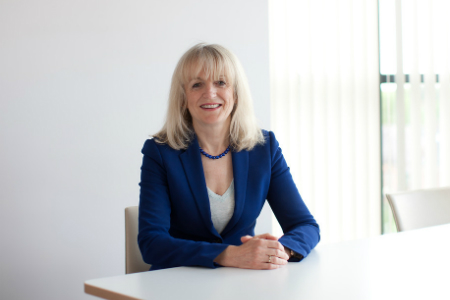 Christine (Chris) Outram, chair of The Christie board of directors, has been awarded an MBE in the Queen’s Birthday honours list.

The award is recognition for Chris’ contribution to the NHS over more than three decades, and the visionary leadership she has demonstrated, with more than 20 years experience driving improvements at an executive level. Since October 2014, Chris has served in the capacity of chair of The Christie board.

During Chris’ time as chair, she has led the board in supporting the development of services and infrastructure at The Christie. Recent new services include proton beam therapy, a new outpatients facility and a state of the art integrated procedures unit which improves patient experience and streamlines services. New treatments provided by The Christie include CAR-T therapy and MR guided radiotherapy.

As chair, Chris has steered the board in supporting The Christie to be the first NHS Trust in the country to receive back to back ratings of ‘Outstanding’ by the health regulator the Care Quality Commission.

The chief executive of The Christie, Roger Spencer, said: “This is a thoroughly well deserved award, marking three decades of dedication to improving health and the NHS. Chris has played a pivotal role in supporting the transformation of The Christie from a centre of excellence for the North West into a world class cancer centre."

Christie charity governor and chair of the Altrincham and Sale fundraising group, Janice Moss BEM, who received an honour in December 2017 for her charity work, added: “Chris Outram has been an outstanding chair of The Christie and I am delighted that she has been given this honour for all her hard work and service to the NHS. Chris is such an enthusiastic and approachable person. She has consistently supported the work of hard working fundraisers like me and our charity fundraising staff team.”

Christie patient, Esther Parkinson, said: “The Christie wouldn't be the same without great people like Chris, who is clearly passionate about what she does. She is very supportive of patients. The Christie has moved forward a long way and progressed lots of fantastic initiatives in the time that Chris has been Chair and she deserves credit for this. I’m thrilled to hear about her honour.”

Previously in her career, Chris was chief executive of the North Central London Strategic Health Authority and NHS Leeds, as well as having a spell as director general for the Department of Health’s Arm’s Length Body Review in 2004.  She was appointed managing director of NHS Medical Education England in 2009, an organisation set up to support the Department of Health’s work to develop education and training for doctors, dentists, pharmacists and healthcare scientists. She later combined this role with that of transition director leading on the set up of Health Education England in 2011.

At Health Education England, she created the basis for workforce planning and for the funding of education for NHS staff that was revolutionary, in that it focused on the engagement of both NHS managerial and also clinical leaders to plan workforce and education that was multi-professional and proactive.

As a pioneer in endoscopy, Richard Wolf defines progress. Our passion for high-performance medical technology has its roots in the Company's history.
Richard Wolf is at the forefront of development of innovative concepts and patient-orientated techniques, through collaboration with medical specialists and academics worldwide. Our...