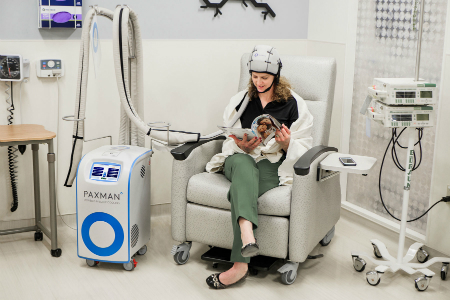 A medical brand based in Huddersfield that specialises in preventing hair loss for chemotherapy patients is launching its products in Japan following regulatory approval.

Paxman manufactures a scalp cooling device with cold caps that are used to reduce the temperature of the scalp during chemotherapy, which can reduce and prevent hair loss. The business supplies its products to 98% of hospitals in the UK and has more than 3000 machines based worldwide including in the US, Turkey, Mexico and Australia.

The healthcare firm has now received regulatory approval to start suppling its products in Japan after a successful trial in five of the country’s leading cancer clinics. The launch will continue collaboration between Paxman and Japan’s Century Medical who have already placed an order for 20 scalp cooling systems which will be installed at Tokyo Medical Center Hospital and Kyoto University Hospital, with deliveries starting in June.

Japan has a universal healthcare system, but patients are expected to pay around 30% of medical bills themselves. The country is regarded as having some of the most innovative healthcare treatments in the world.

Paxman's market approval (Shonin) in Japan covers the clear “indication for use” to prevent chemotherapy-induced hair loss in all cases with solid tumours. Shonin applications are handled by the Japanese Ministry of Health, Labour and Welfare (MHLW)/Pharmaceuticals and Medical Devices Agency (PMDA), thus making the process similar to an FDA approval in the USA. A market certification (Ninsho) is by comparison similar to the CE marking process in the EU as it is carried out by a third party.

The brand has been manufacturing products in Huddersfield since 1997 and was one of the founding members of the Made in Britain organisation. Since joining the organisation in 2012, the business has used its official accreditation marque to showcase the provenance of its goods on all its products.

Made in Britain, which counts more than 1000 British-based manufacturers in its membership, is an independent organisation dedicated to celebrating and supporting British manufacturers of every size by offering a marque of accreditation for goods that have been made or have undergone substantial change in Britain.

Richard Paxman, CEO of Paxman Cooling Systems, said: “Japan has approximately one million new cancer cases every year, and receiving regulatory approval marks a key milestone for us as we strive to become the global expert in scalp cooling.

“What we do is so much more than a job. We want everybody who’s going through chemotherapy to have access to our treatments.  A key part of our global strategy is signifying the quality and provenance of our goods, which is why we first joined the Made in Britain organisation. Using the marque has helped raise awareness that all our machines are made right here in Britain.”

Kathryn Daniel, head of marketing, recently spoke at a Made in Britain-hosted event in Elland to a group of the organisation’s members about how to effectively market your brand in the UK and overseas.

John Pearce, chief executive of Made in Britain, said: “The appetite for British-made goods continues to grow around the world, reinforcing the already strong outlook for manufacturers in Britain.

“Our members act as ambassadors for the quality and innovation in British manufacturing to overseas buyers and Paxman is a great example of this. The opportunities are out there for ambitious manufacturers looking to grow both domestically and overseas.”

Tenacore UK Ltd specialises in the distribution and repair of medical equipment. We work closely with our customers to consolidate their vendor lists, reduce their procurement and maintenance spend, and minimise their risk. As a service provider, Tenacore repairs, exchanges, and offers replacement parts.