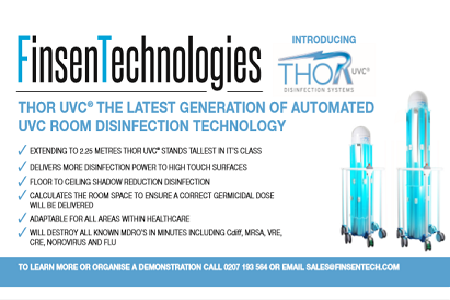 Finsen Technologies are an award winning British manufacturer who specialise in UVC disinfection. We are delighted to now introduce Thor UVC® to the NHS and private sector. Thor UVC® is the very latest high-powered disinfection robot, capable of destroying MDROS and persistent superbugs that linger in operating theatres, patient wards and isolation rooms.

In line with NHS Englands’ national agenda, we also are striving to reduce gram negative blood stream infections by 10% in 2019 and 50% by 2021.

Preventing and controlling infection is the cornerstone of great healthcare, yet nurses, doctors, clinicians and hospital cleaning teams struggle to keep ahead with ever-mutating pathogens which are constantly adapting and adjusting to their environment.

Finsens’ new robot could change all this – THOR UVC uses UV light,  which at 253.7 NM is proven to kill all known superbugs in just minutes. Pathogens such as CDIFF, CRE, VRE,  and NOROVIRUS, will be denatured and destroyed preventing the spread to other patients. (http://www.finsentech.com/thor-uvc).

THOR UVC ® is unique, it has patented protected shadow busting technology which assists in delivering UVC light to darker, harder to reach areas. THOR UVC ® also has multiple sensors which map its’ surroundings and  immediately generate a report  when a room disinfection is complete. Testing and evaluation of the THOR’s efficacy concluded that, irrespective of cleaning time, THOR UVC® killed more than 99.9999% of the MSSA and 99.999% of a baumanii bacteria exposed to it. This game-changer could mean that patients will no longer be at risk of catching an antibiotic-resistant infection while in hospital.

THOR UVC ® generates more UVC power than older generation UV technologies, this high unrivalled output is critical in killing the new strains of superbugs. Its’ telescopic reach is significantly higher than its predecessors, obliterating bugs from floor to ceiling while ensuring even those hiding in shadowed areas are not missed. The robot disinfects a 360 degree area, irrespective of obstacles  and senses clutter and shadows, guaranteeing effective doses in all areas.

THOR UVC® is the very latest in constant wave UVC surface and air disinfection technology. Designed specifically for areas of hospitals and the healthcare environment, it incorporates unique, patented technology and design features that demonstrate 99.999% bacterial kill in just minutes of use.

Superbugs have evolved during a ‘post-antibiotic apocalypse' in which bacteria, fungi, viruses and parasites have mutated to become untreatable. Cleaning a ward or operating theatre, to the extent required to eradicate them has become almost impossible. Traditional cleaning techniques kill just 50% of the bugs responsible for the Healthcare-Associated Infections (HAI) which cause 30,000 deaths and cost the NHS a staggering £1 billion each year.

We are proud to say that Finsen Technologies is a British manufacturer of THOR UVC ® and the Nanoclave UVC Disinfection Cabinet.  We were also the UK Global Export  Prize winner in 2018 and have successfully exported our UVC technologies to 18 global healthcare markets.

“We’ve been working on new, updated UVC technology for some time now, knowing that it is an incredibly effective means of killing most bugs. With this knowledge, we have designed something incredible – a new generation robot that generates more UVC than its’ predecessors, making it faster, more efficient and less expensive.  THOR UVC® destroys almost 100% of bacteria in just minutes of use, and has applications in hospitals and beyond. We are proud to be part of this revolution in infection control.”

UVC  is a short-wavelength ultraviolet light, which works by disrupting the bugs’ DNA, rendering them useless. This method uses no chemicals, reaches floor to ceiling and is suitable for even the smallest of spaces. It is also extremely portable, meaning it can be used in areas such as ambulances. The technology has proven to be a success, eliminating culprits including C. Diff, MRSA, Ebola and Norovirus.

“As these superbugs evolve, it is essential that we evolve with them – increasing our vigilance and infection-control measures. Hand hygiene has been implemented as standard in all hospitals and this has helped to control infection to some extent. We are now faced with incredible technology that could save further lives while also reducing the cost of infection, now is the time to start implementing it in our hospitals.” Ingenica Solutions has a proven track record in delivering focused IT solutions in the areas of procurement, supply chain, inventory management and the back-office; bringing significant benefits to both the NHS and suppliers to the challenging, fast-moving healthcare environment.